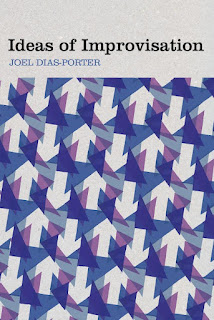 Posted by Joel Dias-Porter at 11:14 PM No comments:

So I've been playing around with this new idea in my manuscript that I'm calling "Endopoems" where I highlight existing words in a poem to create an entirely new and different poem inside of it. It's kind of like the negative of an Erasure poem, but with the original text still present. All of the text forms the base poem and the red text forms another poem inside or on top of it. Most of these Endopoems are haiku or senryu or epigrams that use the principles of Japanese short form poetry, although a few of them are just short poems. I like the way it can be an entirely new poem with its own ideas, add an extra dimension to the base poem, or even contradict it. Below are a few examples from my current manuscript "Ideas Of Improvisation."

AN IDEA OF IMPROVISATION WITHIN THE UNCERTAINTY PRINCIPLE

(a free jazz of ashes buried or scattered by a dead? cat in a different key)

on the musical taste of

it was quite a pinch

when a light note later

the purpose of the thorns

for the first time

of a pond that Cecil

tailored in the moment

but to enter in,

"Perhaps the light of a pond beyond the diagram but feeling nearly the point of it."

FATHER, SON AND THE WHOLLY GHOST

in the alleys of memory.

There, shards of smiles glitter

but here we wear the same name

though you can’t or won’t

remember what date I was born.

In some versions this may be all

you have taught me:

and collapse as many families

Now a prisoner in death's camp,

you wither each day

until we may count your T-cells

When the phone beckons

I may be wrong—

don’t some of us

THE COLTRANE IN YOU

before the first Oh!

at the center of God.

you start to dream of tracing—

that Alice or Stevie

the black of our mouths

And since the tint

is half the sound

(in the feeling of faith

rather than gothic of god)

borne in a mouthpiece.

at the wheel of the warship

of worship you vie

or strive to maroon

at the bluest end

in a bitter suite

as incensed ropes of smoke

it’s the lion or angel

the swing of most triads

And since all great musicians

know there are only

and kiss the ground,

to mean all things

how therefore to be drawn

around a circle of fifths

as you Picasso keys

into a piano’s grand motif.

perhaps brayed into a bridge—

to absolve some resolve

or flip the full-hipped logic

as you Bearden the burden

of our double basis

of the quest inside

may also be a weight,

—wind from a box—

until God is an American

Since prayer is a petition

in their artful craft

until they’re well nigh

AN IDEA OF IMPROVISATION WITH MISSING TEETH

As a kid, Pythagoras
(my purple plush toy)
made joyful sounds

only I could hear
until a bike sprocket of logic
severed his single horn.
Newly numb,

I sought to sew together his song

and thus took up the trumpet.

how the brains of birds

seem to beg for beauty
as they bear the seeds

of notes in their beaks.
Maybe my school trumpet begged

to be muted when moonlight

as I practiced what beauty was allowed.

accounted for the lyric

as a sine of certain numbers

in our universe.
Perhaps the bird part of our brains

co-signed the seeds of language
because it longed to fill our tangents
with evergreen musing about music.
Can’t the needles of a pine
and the needles of a phonograph
both sew scented air into song?
Have you ever smelled oil

in a trumpet's breath
or felt rhythm uncoil

to kill time round midnight?
Logicians claim death
has many fugues—but little logic—

and yet wasn’t death somewhere branded

with the fugitive logic of the fleur de lis?
My boy T claims this might be

the truest thing about music:
a lyric can be a useful essay,
but an essay is a useless-ass lyric.
Sometimes I imagine lyrics

collecting on lips as dew

on Dogwood leaves.
Say silly you leaves your school trumpet
on a train coming home,
but that stray horn never holds it against you.
Maybe I also took up the horn

to note something about holding Latricia Taylor
and collecting her breath
in the bowl of my collar bone.
Say after an errant elbow
knocks loose a front tooth,
you try to pick up
your horn again,
but red graffiti scrawled
in a school bathroom stall
claims a one armed man
will never play his violin.
Doesn’t every trumpeter’s mouth
resemble a red wound?
Suppose you could read sheet music
easily as your Beloved’s grocery notes,
but not read their most notable longing,
because you only knew Desire

as a housing project
in a city famous for its trumpet players.
Some nights I think
Pythagoras merely heard music
as the grammar of sound making sentences
but, listen—who among us hasn’t

galloping out a bridled mouth?

AN IDEA OF IMPROVISATION AS COMPULSIVE PRAYER

What’s the difference between chocolate and any other pleasure darkened? And pray tell which desire registers deepest in a casino—those giant shrines to Apophenia—such that a man who wagers by probability and therefore can’t be addicted also can’t stop trying to solve this woman (who has arrived to serve him dissolved spirits) like an Incompleteness Theorem? Is it the Vagus Nerve which causes octaves of chocolate in her skin tone to French Horn into harmony in the hallways of his mouth? If you’ve ever wagered and lost it all, you might know why a choir means to gather, but what could it mean to hymn? Let us pretend that the phattest asymptotes don’t curve into forever as we query if any door besides endorphins numbs our hunger round these numbered wheels. And if said door is mascara black or lipstick red. Which shade of hymn best befalls the shadows of balls briefly brushing whatever digits he seeks? None? Is this the part of the arc where we act uncertain if Schrödinger’s cat is black as a clarinet strung around Rahsaan Roland Kirk’s neck? Or the part where our gambler compounds his losses by denying the hymn of her name arranged in red is a litany he would petition dark arts to learn? Pray tell, does the darkest logic of chocolate involve merely pleasure barred — or — how sweetly it bids us swipe our debit cards in the register of longing?

I feel like I've really only scratched the surface of what I can do with this, so it's pretty exciting to play around with it and see what all is possible. I haven't decided on what I'll do about line breaks when I print the Endopoems apart from the base poem. There are decent arguments for retaining the original breaks or for using new line breaks. Anyway, that's what I've been up to writing wise for the last year or so. I'm vaccinated so I can't wait for live poetry readings to start back up.

Some cuts from my CD and some random Love Poems

Links to my Poems on the Web